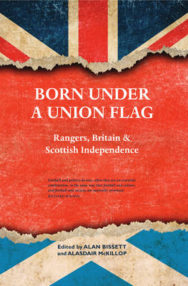 Born Under a Union Flag: Rangers, Britain and Scottish Independence

A book about the relationship of a football club to a political decision? On one level this is madness. But in Scotland it makes perfect sense. What do Rangers mean to Scotland and what does Scotland mean to Rangers? What do Rangers mean to Britain and what does Britain mean to Rangers? How does the club and the game interact with the world around it? Questioning how British and Scottish identities fit into supporting Rangers, Born Under the Union Flag provides the first solid exploration of the relationship between sport and national identity. Well-known and informed contributors from both sides of the independence debate, including Harry Reid, Iain Duff, and Will McLeish, all lend their disparate viewpoints this book, showing just how nuanced – and difficult – the discussion really is. A must-read for anyone interested in Rangers, the history of Scottish football, or the independence debate. Like a great football match, when the final whistle is blown, the players will shake hands and move on. If they have any sense, the winners will be magnanimous in victory; the losers will rue the day but accept the result nonetheless.I guess the one thing neither side wants is a draw and a replay. But that’s up to the voters.

COLIN ARMSTRONG is a former columnist for both Rangers News and the Rangers match-day programme. He contributed to the book Ten Days that Shook Rangers (Fort, 2005) and Follow We Will: The Fall and Rise of Rangers (Luath Press, 2013, and has written extensively on the subject of Rangers for other media, including When Saturday Comes, The Rangers Standard and WATP Magazine. Born in Glasgow, he now lives in Falkirk with his wife Shona and their two children Connor & Sophie. ALAN BISSETT is a novelist, playwright and performer. He was Glenfiddich Spirit of Scotland writer of the Year in 2011 and in 2012 was shortlisted for the Creative Scotland/Daily Record Writer of the Year award. His most recent novel, Pack Men, about a trip by Rangers fans to the UEFA Cup Final in Manchester, was called by Irvine Welsh ‘a landmark in Scottish fiction’ and was shortlisted for the Scottish Mortgage Investment Trust Novel of the Year. He is active in the Yes Scotland campaign and is currently writing a play about Graeme Souness. IAIN DUFF is an award-winning journalist with almost 20 years’ experience of writing for publications in both England and Scotland. He joined Glasgow’s Evening Times as a news reporter in 1995 and two years later became the paper’s chief reporter at the age of 25. The same year he won the prestigious UK Press Gazette Scoop of the Year award and was nominated as Scotland’s young journalist of the year. He later joined the Press Association, where he was Scottish editor for six years. His books include Follow on: Fifty Years of Rangers in Europe (Fort, 2006) and Temple of Dreams: The Changing Face of Ibrox (DB, 2008). JOHN DC GOW is a freelance writer who is a regular contributor to ESPN on Scottish football and Rangers FC, and has contributed to football magazines such as Away End. He is also a co-founder of The Rangers Standard. Besides writing about football, he is particularly interested in studying Rangers and their relation to sectarianism, both in ending the backward form of hatred, but also how it relates to freedom of speech and belief. ALASDAIR MCKILLOP is a co-founder of The Rangers Standard. He is the co-editor of Follow We Will: The Fall and Rise of Rangers (Luath Press, 2013) and a contributor to Bigotry, Football and Scotland (Edinburgh University Press, 2013). He is a regular contributor to the online current affairs magazine Scottish Review, where he writes about sport and politics. WILL MCLEISH was born in Glasgow and spent more than ten years playing semi-professional football in Scotland. He is a former BBC Scotland sports broadcast journalist and was First Minister Alex Salmond’s political spokesperson from 2007-2011 (Special Adviser). EILEEN REID Is Head of Widening Participation at the Glasgow School of Art. She was formerly Lecturer in Philosophy and Politics at Langside College, and philosophy columnist with the Glasgow Herald and Scottish Review. As a columnist and in her current role she deals with a wide range of political, social and cultural issues, with particular emphasis on education, poverty and under-representation in Scotland’s institutions. She is also the eldest daughter of Jimmy Reid and works closely with researchers, biographers and others interested in her father, and working-class culture generally. HARRY REID Is a former editor of The Herald and author of a number of books including Outside Verdict: An Old Kirk in a New Scotland (Saint Andrew Press, 2002) and The Final Whistle: Scottish Football – The Best and Worst of Times (Birlinn, 2005). He holds honorary doctorates from the Universities of Edinburgh and Glasgow for his services to journalism. GAIL RICHARDSON is a popular blogger and prominent member of the online Rangers community. A lifelong Rangers fan, she attended her first game at Ibrox when she was six years old. She is a socialist and a feminist. JOHN ROBERTSON has been Member of Parliament for Glasgow North West since 2000. He worked for British Telecom for over 30 years, during which time he was active in the Communications Workers Union and West of Scotland chairman of Connect union. He is the chairman of the Westminster Rangers Supporters’ Club. PAMELA THORNTON was born and raised in Glasgow, then lived and worked in Gloucestershire for over 25 years. She returned to Scotland just as the new Scottish Parliament was born. Pamela’s father and uncle were Rangers supporters and she learned to sing ‘Follow Follow’ as a toddler. She is currently working on a novel. Pamela can be found on Twitter @pamelathornton. ADAM TOMKINS has been a Professor of Law at the University of Glasgow since 2003. He and two of his sons are season ticket holders at Ibrox. He blogs about Scottish politics at notesfromnorthbritain.wordpress.com. GRAHAM WALKER has published widely in the fields of Scottish and Irish history. He is co-editor with Ronnie Esplin of It’s Rangers For Me? (Fort, 2007) and Rangers: Triumphs, Troubles, Traditions (Fort, 2010). He is the co-author, also with Ronnie Esplin, of The Official Biography of Rangers (Hachette Scotland, 2011). ALLAN WILSON is from Glasgow. His short story collection Wasted in Love was shortlisted for Scottish Book of the Year in 2012. He is a founding member of Scotland Writers FC and is working on various novels, short stories and plays. RICHARD WILSON is a Senior Broadcast Journalist at BBC Scotland, having previously written for The Herald and the Sunday Times Scotland. He lives, works and is immersed in football in Glasgow, a city that is also, captivatingly, full of contradictions. ALEX WOOD is a retired headteacher. He was born in 1950, and spent his early years in Brechin, Girvan and Paisley. He writes on education for the Times Educational Supplement Scotland and other journals. He is now completing a book on his experiences over four decades at the front line in Scottish schools. Throughout his life he has had an active interest in politics. He was a member of the Labour Party from 1968 until 1986, was twice a parliamentary candidate and for seven years a councillor on Edinburgh District Council. For the last 20 years he has been a member of the SNP.