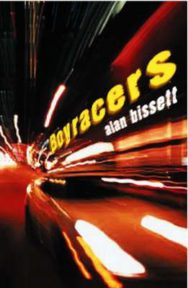 Since its first publication in 1999, “Boyracers” has established itself as a contemporary Scottish cult classic. It is a totally fresh, savvy and supremely honest take on being young, naive and hopeful, and the pains of living life at hyperspeed in a mad pop-culture world. It is fast, pacy and funny – a breathtaking joyride through the formative years of four Falkirk teenagers.

'One of the best things I've read in ages' ALI SMITH 'There is real emotion here, and gutsiness … a feeling for language so passionate it shames the dullness of so many sentences that make it into print' ROSEMARY GORING 'A breakneck dash through the back streets of Falkirk … a comedy, almost a tragedy, a caustic look at what has passed for culture in the last decade.' THE BIG ISSUE

Alan Bissett was born in Falkirk in 1975 and attended the University of Stirling. He currently lives in Glasgow. He is the editor of Damage Land: New Scottish Gothic Fiction (Polygon); his most recent novel is Death of a Ladies’ Man.