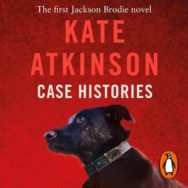 Brought to you by Penguin.’Investigating other people’s tragedies and cock-ups and misfortunes was all he knew. He was used to being a voyeur, the outsider looking in, and nothing, but nothing, that anyone did surprised him any more. Yet despite everything he’d seen and done, inside Jackson there remained a belief – a small, battered and bruised belief – that his job was to help people be good rather than punish them for being bad.’Cambridge is sweltering, during an unusually hot summer. To Jackson Brodie, former police inspector turned private investigator, the world consists of one accounting sheet – Lost on the left, Found on the right – and the two never seem to balance. His days are full of people clamouring for answers and explanations. A jealous husband suspects his wife. Two spinster sisters make a shocking find. A solicitor investigates an old murder. A nurse has lost her niece; a widow, her cats.Jackson has never felt at home in Cambridge, and has a failed marriage to prove it. He is forty-five but feels much, much older. He is at that dangerous age when men suddenly notice that they’re going to die eventually, inevitably, and there isn’t a damn thing they can do about it. Surrounded by death, intrigue and misfortune, his own life is brought sharply into focus.Ingeniously plotted, full of suspense and heartbreak, CASE HISTORIES is a feat of bravura storytelling that conveys the mysteries of life, its inanities and its hilarities. It is a life-affirming work of profound insight and intelligence.(c)Kate Atkinson 2004 (P) Penguin Audio 2020

"Triumphant…Her best book yet…A tragi-comedy for our times" * Sunday Telegraph * "Her best book yet, an astonishingly complex and moving literary detective story that made me sob but also snort with laughter. It's the sort of novel you have to start rereading the minute you've finished it" * Guardian * "To read it is to enter a hall of mirrors…Part complex family drama, part mystery, it winds up having more depth and vividness than ordinary thrillers and more thrills than ordinary fiction…A wonderfully tricky book" * New York Times * "Sharp humour, together with a number of unexpected twists makes this a typically pacey and intelligent read" * Daily Mail * "A greedy feast of a story by a masterful author…A profound, exciting and lingering read" * Daily Express *