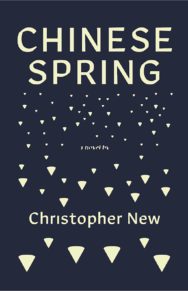 Hong Kong, 2012. Dimitri Johnson learns that he is dying. Stunned by his doctor’s prognosis, he nevertheless makes his ritual annual pilgrimage to the candlelight vigil for the victims of the Tiananmen Square massacre. But this year, he thinks, may be his last. So little time remains.

Over on the mainland, Chinese academic Yu Guodong is arrested for protesting against an official land grab in his ancestral village. Guodong’s wife appeals to Dimitri’s family for help, but taking on the forces of the state is fraught with danger. And isn’t it simply a fool’s errand, anyway?

A powerful family drama set against the backdrop of the burgeoning protest movement that led to Hong Kong’s Umbrella Revolution, Chinese Spring explores the reality of democracy and dissent in modern China. And begs the question: have things really changed for the post-Tiananmen generation?

Christopher New is the author of the New York Times bestselling novel Shanghai, part of his critically acclaimed China Coast trilogy. Born in the UK and educated at Oxford and Princeton Universities, he is a former Head of the Philosophy Department at Hong Kong University, and he has written a number of highly praised novels set in Asia, the Middle East and Europe.