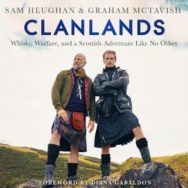 Home > Art, Architecture & Photography > Clanlands: Whisky, Warfare, and a Scottish Adventure Like No Other

Clanlands: Whisky, Warfare, and a Scottish Adventure Like No Other

A road trip book with a difference. Stars of Outlander – Sam Heughan & Graham McTavish – explore Scotland, a land of raw beauty, poetry, feuding, music, history, and warfare.With a foreword by Diana Gabaldon.From their faithful camper van to boats, kayaks, bicycles, and motorbikes, join stars of Outlander Sam and Graham on a road trip with a difference, as two Scotsmen explore a land of raw beauty, poetry, feuding, music, history, and warfare.Unlikely friends Sam and Graham begin their journey in the heart of Scotland at Glencoe and travel from there all the way to Inverness and Culloden battlefield, where along the way they experience adventure and a cast of highland characters. In this story of friendship, finding themselves, and whisky, they discover the complexity, rich history and culture of their native country.(P)2020 Hodder & Stoughton Limited

Sam Heughan (Author)Sam Heughan came to fame through the hit TV show Outlander, playing the lead character Jamie Fraser for five successful seasons. Released on Starz in the US, the show is viewed all around the world. With a career in theatre (Laurence Olivier award nominee), television and film spanning 17 years. Most recently seen in the Sony Pictures Bloodshot movie opposite Vin Diesel.Graham McTavish (Author)Graham Mctavish has had an acting career spanning 35 years – best known as Dougal Mackenzie in the Starz hit show Outlander, and the fence Dwarf, Dwalin, in the Hobbit trilogy. He most recently starred as The Saint of Killers in AMC’s show, Preacher, based on the cult graphic novels of the same name.