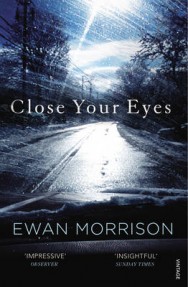 “Close Your Eyes is an astonishing book. It manages to be both clear-eyed and harsh, compassionate and just. It takes us right to the heart of the turbulent social changes that defined our last quarter century and it is a revealing, honest, searing novel about mothers and children, about what it means to be part of a family. The story, the writing, the moral intelligence: all of it is a knock out”. (Christopher Tsiolkas, author of The Slap). In 1981 a mother abandoned her child and drove into the night, never to return. Her disappearance was reported in the press as a fatal road accident. Her body was never found. Thirty years later, Rowan has a child of her own. Afflicted by post-natal depression, she is convinced that she’ll hurt her daughter unless she unpicks the mystery of her past, buried deep within a commune in the remote highlands of Scotland. Leaving her young family and life in London, she returns to her childhood home to find a failed utopia shrouded in secrecy. And there, with a looming cult leader, among the rites and rituals, the sacraments and ceremonies, is a single postcard dated a week after her mother’s death.As she draws ever closer to the truth about her mother, she fears she might lose even herself.

Reviews of Close Your Eyes

"The whole of Close Your Eyes is an admirable and intimate wrestling with the damages incurred by trying to heal, as Adorno once called modernity, "a damaged life"…anyone wanting to read a wise, emotionally literate gauge of the burdens – and blarney – of alternative living should buy it immediately." — Pat Kane Independent "In Close Your Eyes, Ewan Morrison carries off the compelling second-person voice brilliantly…the novel is beautifully set to a soundtrack of Rowan's childhood." Times Literary Supplement "An insightful tale of a brave new world revisited." — Nick Rennison Sunday Times "Beautiful. Haunting. If Ewan Morrison was a woman, Close Your Eyes would be destined for the Orange Prize shortlist." — Helen Walsh "A brave, sensitive, painful novel, Close Your Eyes is an alternative history of the last forty years, an exploration of the damage idealistic, well-intentioned parents can do to their children, and a reminder that it is sometimes the people who are absent who really fill our lives." — James Robertson

Ewan Morrison is the author of three novels and a collection of short stories, winning a Scottish Arts Council Award in 2005. He lives in Glasgow.