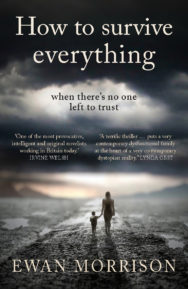 Home > Fiction from Scotland > How to Survive Everything

How to Survive Everything

My name is Haley Cooper Crowe and I am in lockdown in a remote location I can’t tell you about. Haley and Ben live with their mother. But with inside knowledge of a new, deadlier-than-ever pandemic that’s about to overwhelm them, their father is determined to get them to the safety of his secret hideaway … Problem is, there is no way their mother will go along with this plan. When their father kidnaps them and takes them to his prepper compound, they have no contact with the outside world. They’re fully equipped with rations and emergency kit, but they face deeply conflicting views of reality with no reliable source of news. Will they survive, save their mother, deter intruders and keep everyone safe? This is Haley’s account of how to navigate the collapse of society, family and everything she knows.

Reviews of How to Survive Everything

"One of the most provocative, intelligent and original novelists working in Britain today." Irvine Welsh; "Urgent and exciting, harnessing our current global anxiety with a beautifully observed family drama." Atom Egoyan; "Terrifying … a terrifically written thriller that puts a very contemporary dysfunctional family at the heart of a very contemporary dystopian reality." Lynda Obst, Producer of Interstellar; "How To Survive Everything is a gritty and (tragically) cool novel. The collision of a broken family and a global pandemic, it reads as a survival guide and feels like (is) a warning." David Shields

Ewan Morrison is a multi-award-winning novelist, screenwriter and essayist. His 2019 novel, Nina X, won the Saltire Society Scottish Fiction Book of the Year and is currently being developed as a feature film with a multi-award-winning director. He has previously won the Scottish Book of the Year Fiction Prize (2013) and the Glenfiddich Scottish Writer of the Year (2012). His first feature film, an adaptation, was released in five territories in 2016, and was a finalist for four international film awards. American Blackout, a feature length docudrama co-written by Morrison, reached an estimated audience of 30 million viewers. Morrison has also been nominated for three Scottish BAFTAs.