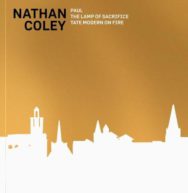 This richly illustrated publication explores the work of contemporary artist Nathan Coley. It offers a detailed look at three of his most significant sculptural works: The Lamp of Sacrifice, 286 Places of Worship, Edinburgh 2004, 2004; Paul, 2015; and Tate Modern on Fire, 2017, which is reproduced and discussed here for the first time. In a newly commissioned text, award-winning novelist, screenwriter and director Ewan Morrison focuses on these three sculptures to explore the complexity and ambiguity of Coley’s artistic practice. Morrison brings into play different narrative forms and voices to draw attention to the realms of history, art history and politics that Coley’s work inhabits, as well as the deeply personal responses that Coley’s work can generate. This book accompanies the exhibition NOW at the Scottish National Gallery of Modern Art, Edinburgh (25 March to 24 October 2017).

Ewan Morrison is an award-wining novelist, screenwriter and director. He has published six works of fiction. Among many recent awards, Morrison won the Scottish Book of the Year (SMIT) Fiction Prize in 2013 for his novel Close Your Eyes, and in 2012 he was named the Glenfiddich Scottish Writer of the Year.