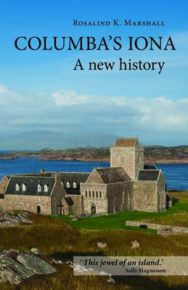 In May 2013 it will be exactly 1450 years since the arrival on Iona of Columba, the imperious and energetic Irishman of royal descent who founded its famous monastery and became Scotland’s best known Celtic saint. To celebrate this important anniversary, Iona Cathedral Trust has commissioned a new book by the historian Rosalind K. Marshall. Using a wide variety of sources and taking into account the results of the most recent historical and archaeological research, she charts the many developments on Iona throughout the centuries, investigating why it has had such an enduring influence on Scottish life. In our own apparently secular age, thousands of people visit the tiny and remote Hebridean island each year to experience its unique atmosphere of tranquil spirituality. Columba’s wood and wattle buildings have long since vanished, replaced by a Benedictine abbey of stone, but after the Reformation it fell into neglect, languishing for two hundred years as no more than a romantic ruin.In the early twentieth century, however, it was restored by the Church of Scotland’s Iona Cathedral Trust and by the charismatic, controversial George MacLeod, founder of the Iona Community, an experiment in Christian living which flourishes to this day.

Rosalind K. Marshall, is an author, historian and Fellow of the Royal Society of Literature. Specialising in women’s history, especially of the sixteenth and seventeenth centuries, she is the author of The Days of Duchess Anne, John Knox, Queen Mary’s Women and Scottish Queens. She is also a research associate of the Oxford Dictionary of National Biography.