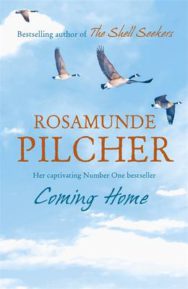 Born in Colombo, Judith Dunbar spends her teenage years at boarding school, while her beloved mother and younger sister live abroad with her father. When her new friend Loveday Carey-Lewis invites Judith home for the weekend to Nancherrow, the Carey-Lewises’ beautiful estate on the Cornish coast, it is love at first sight. She falls in love too with the generous Carey-Lewises themselves. With their generosity and kindness, Judith grows from naive girl to confident young woman, basking in the warm affection of a surrogate family whose flame burns brightly. But it is a flame soon to be extinguished in the gathering storm of war. And Judith herself has far to travel before at last …coming home.

Rosamunde Pilcher has had a long and distinguished career as a novelist and a short story writer, who was awarded an O.B.E. for services to literature in 2002, and an honorary Doctor of Laws degree from Dundee University in 2010.