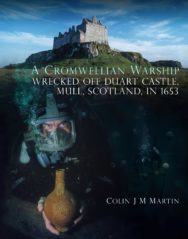 A Cromwellian Warship Wrecked off Duart Castle, Mull, Scotland, in 1653

The latest publication from the Society of Antiquaries of Scotland records the excavation of the wreck of a small Cromwellian warship, believed to be Swan, which was found off Duart Point in 1979. Maritime archaeologists investigated the wreck, beginning a programme of survey, limited excavation and research which uncovered much of the ship’s lower hull and parts of the collapsed
upper stern. Including contributions from many of the experts involved in the excavation, this volume charts the project’s development, the identification of the wreck and its archaeology, as well as detailing the historical background to the shipwreck.

This is the definitive report of the major archaeological project undertaken at Duart Point and is fascinating reading for maritime archaeologists and historians, and all those interested in sailing warships at a critical time in their development.

Colin J M Martin PhD FSA Scot FRHistS MCIfA is a retired Reader in Maritime Archaeology at the University of St Andrews. He has investigated historic shipwrecks in Scottish and Irish waters. His previous publications include Scotland’s Historic Shipwrecks (1998).