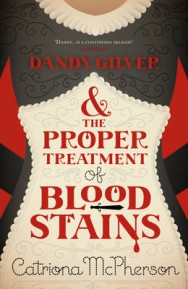 Dandy Gilver and the Proper Treatment of Bloodstains

1st May 1926 – Dear Alec, Just when those who should be working are all downing tools for this wretched strike (and I still can’t believe it – I mean to say: riots, Alec – in Edinburgh of all places) guess who is setting her virgin shoulder to its very first wheel? I am dressed in serge and sensible footwear, sleeping in an iron bed and dining off pickled tongue at six o’clock each day. I am, in short, that nice young Mrs Balfour’s new maid. But don’t worry, Alec dear: things haven’t got as bad as all that. It’s just that that nice young Mr Balfour is going to kill his wife. At least, she thinks so, and the more I hear about him from butler, cook and bootboy the more I’m inclined to agree. So I’m undercover, in disguise, bent upon foiling. And jolly hard work it is too – tomorrow is my half-day free if you’d care take me out for a restorative bun. (Every maid needs a beau to buy buns for her.) Yours, Dandy xx p.s. Ask for Miss Rossiter: below stairs I am she.

Catriona McPherson was born in the village of Queensferry in south-east Scotland in 1965 and educated at Edinburgh University. She left with a PhD in Linguistics and spent a few years as a university lecturer before beginning to write fiction. The first Dandy Gilver novel was short-listed for the CWA Ellis Peters Historical Dagger 2005 and the second was long-listed for the Theakston’s Crime Novel of the Year Award 2007. In 2012 DANDY GILVER AND THE PROPER TREATMENT OF BLOODSTAINS was nominated for a Historical Macavity Award. Catriona writes full-time and divides her time between southern Scotland and northern California. www.dandygilver.com www.catrionamcpherson.com www.twitter.com/CatrionaMcP