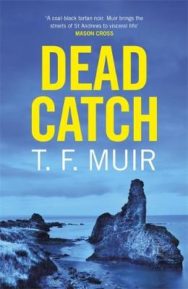 When Joe Christie’s fishing boat is swept onto Tentsmuir beach during a fierce storm, a man’s mutilated body is found in the hold. DCI Andy Gilchrist of St Andrews CID is called in to investigate. But his murder investigation deepens when he learns that Joe Christie and his boat have been missing for three years.The police pathologist, Dr Rebecca Cooper, retrieves a five pound note from the dead man’s throat. Is this the killer’s calling card? And whatever happened to Joe Christie? Cooper offers Gilchrist a clue to the dead man’s identity – a scar from a recent operation to repair a bone shattered by a bullet.The dead man is found to have been on the payroll of big Jock Shepherd, Scotland’s premier crime patriarch, and when three more of Shepherd’s men turn up brutally murdered, Gilchrist fears a tectonic shift in the criminal underworld.Gilchrist and his partner, DS Jessie Janes, set off along a murderous trail where they uncover a plot involving drug shipments and police corruption, and come face to face with a man for whom human life means nothing.PRAISE FOR T.F. MUIR:’Rebus did it for Edinburgh. Laidlaw did it for Glasgow. Gilchrist might just be the bloke to put St Andrews on the crime fiction map.’ Daily Record’A truly gripping read, with all the makings of a classic series.’ Mick Herron’Gripping and grisly, with plenty of twists and turns that race along with black humour.’ Craig Robertson’DCI Gilchrist gets under your skin. Though, determined, and a bit vulnerable, this character will stay with you long after the last page.’ Anna Smith’Gripping!’ Peterborough Telegraph

Born in Glasgow and now a dual UK/US citizen, T.F. Muir is the author of the DCI Andy Gilchrist series – the first of which, Eye For An Eye, won the Pitlochry Award for the best crime novel by an unpublished writer, and the second, Hand For A Hand, continues to garner great reviews.He is now working on his next Gilchrist novel, another story suffused with dark alleyways, cobbled streets and all things gruesome.