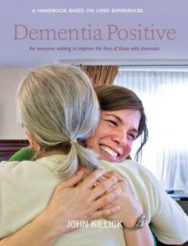 This book is not about the past, which has gone. Or the future, which is uncertain. But it is for those who want to improve the lives of people with dementia and themselves in the Here and Now. The book is not written by an expert but by a man seeking to find new approaches concerning dementia who wishes to share his discoveries.Killick steers clear of any sort of medical terminology and instead nurtures the often neglected aspects of dementia, thereby reinforcing to the reader that these are of no lesser importance.In recognition that we are all in this together, Killick gives equal prominence to quotations from, and conversations with, people with dementia and their carers.

JOHN KILLICK was a teacher for thirty years, and has been a writer all his life. He has published books of his own poetry and books on creative writing. He began working with people with dementia in 1992, and has held a number of posts with nursing homes, hospitals, libraries and arts centres. He has edited six books of poems by people with dementia, and co-authored books on communication and on creativity. He has written many articles and book-chapters, and given many workshops in the UK and abroad. He has also made a number of broadcasts.