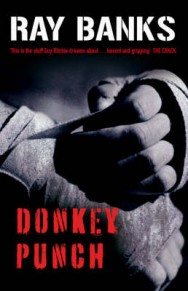 With the barbed-wire leash of parole behind him and his PI business an unpleasant memory, Cal Innes is looking forward to continuing his job as caretaker at Paulo’s Lads’ Club. But prodigal amateur boxer, Liam, needs someone to go with him to his first major tournament in Los Angeles. That someone is Cal. Cal’s babysitting job swiftly turns into something more sinister, as rumours of a rigged competition fly around. As his codeine habit and Liam’s temper grow out of control, the City of Angels doesn’t seem quite so heavenly.

Ray Banks, born in Kirkcaldy, is one of the new wave of Scottish crime writers, with seven books to his name, including “The Big Blind,” “Saturday’s Child,” “No More Heroes” and “Beast of Burden.” Ray’s short stories have appeared in many prestigious collections including Maxim Jakubowski’s annual “Best of British” “Mysteries V.4” (Allison and Busby, 2006), “Best New Noir” (PointBlank, 2007) and “The Mammoth Book of Best British Crime” (Robinson 2009). Ray is also a regular contributor to crime fiction ezines and various music magazines. He currently lives in Newcastle-upon-Tyne with his wife and a fat, black cat named after a dead country singer.”