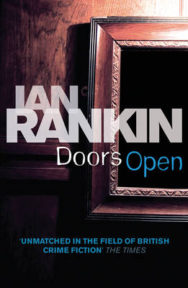 For the right man, all doors are open…Mike Mackenzie is a self-made man with too much time on his hands and a bit of the devil in his soul. He is looking for something to liven up the days and perhaps give new meaning to his existence. A chance encounter at an art auction offers him the opportunity to do just that as he settles on a plot to commit a ‘perfect crime’. He intends to rip-off one of the most high-profile targets in the capital – the National Gallery of Scotland. So, together with two close friends from the art world, he devises a plan to a lift some of the most valuable artwork around. But of course, the real trick is to rob the place for all its worth whilst persuading the world that no crime was ever committed. But soon after he enters the dark waters of the criminal underworld he realises that it’s very easy to drown…THIS BOOK IS ALSO AVAILABLE ON AUDIO

'It convincingly shows that he can move with aplomb into another crime form, and tell a story that's typically at once gripping and full of subtle effects, without his depressive detective holding it together' — John Dugdale SUNDAY TIMES 'Doors Open is a lot of fun. It's pacy, witty, full of action, twists and splendid dialogue. And Rebus does make a subtle appearance when an officer describes his police station as "a damn sight quieter since you-know-who retired" ' THE TIMES 'Because Rankin is a master story-teller, that means the reader is quickly swept up and carried along. I read this in one sitting, on a swelteringly hot beach in Greece; I kept meaning to do other things – find a beer, fetch a sunhat, check the BlackBerry – but somehow had to keep putting them off until I finished this chapter; and then the next; until I'd reached the end' — Andrew Marr GUARDIAN 'An immensely satisfying, bloody and constantly surprising story of middle-class amateurs mixing it with the big boys. And, as usual, Edinburgh – "a village masquerading as a city" – is a character in itself. So much so that "you-know-who" is hardly missed' EVENING STANDARD 'Rankin has taken a holiday from Rebus before, notably in the Jack Harvey thrillers. Here he is trying something new, a "caper" that is also a publishing experiment. Doors Open was serialised in the New York Times so it should reach even more readers than Rebus did' TIMES LITERARY SUPPLEMENT 'It's different – and it's good' — Carla McKay DAILY MAIL 'Rankin is having fun here, name-checking Ocean's Eleven and Banksy, inverting the Rebus idea and writing a heist thriller from the criminals' point of view' METRO 'Ian Rankin can pull off an audacious criminal caper even without his trademark detective' SCOTLAND ON SUNDAY 'a superbly-plotted, light-hearted romp which owes a debt to Ocean's Eleven, but has plenty of charm of its own too' BIG ISSUE IN SCOTLAND 'Rankin is enjoying himself here examining the flipside of Rebus' world: the mindset of the criminal attempting the perfect crime. The plotting and suspense are as impeccable as ever, and his ear for dialogue and insight into his home city remain perfectly honed. Freed from his Rebus back-story, Rankin sets a rattling pace, and Doors Open is an untrammelled joy to read. Consummate in its execution, this is another fine addition to Ian Rankin's career, Rebus or not' THE LIST 'As you'd expect from Rankin, a good plot and an interesting collection of Edinburgh characters' CHOICE 'You won't be able to turn the pages fast enough' RED 'The king of crime returns with another rip-roaring thriller' WOMAN 'Rebus might be resting but Rankin has lost none of his skill in creating a pacy plot set in Edinburgh. It's a compelling story with some great characters, at least one of whom I wouldn't be surprised to see in a future book. Recommended' THE BOOK BAG 'There is acute psychology and social commentary in Doors Open' STANDPOINT 'This comic crime caper is a real treat, with Scotland's superlative author masterfully delivery thrill-a-minute plot twists on every page. Rankin fans, and even Rankin amateurs, will be crying with laughter, as well as crying out for more' NHS MAGAZINE 'Rankin has produced another stunningly clever plot, and peopled it with convincingly intriguing characters. Can this man do no wrong?' DAILY MIRROR 'Perhaps Rankin's most entertaining book yet, an old-school caper with a sting in the tail' — John Connolly IRISH TIMES 'Fans of Rankin's successful Inspector Rebus series can stop crying into their whiskies. The publication last year of Exit Music, the final novel featuring the hard-drinking detective, has not stopped its author writing some excellent new tartan noir. Doors Open is Rankin's first stand-alone thriller for a decade. A fast-paced, intriguingly plotted tale of a heist in Edinburgh's art world, it also features the city's shadier side – where Rebus so often hung out' — Melissa McClements FINANCIAL TIMES 'This is exhilarating stuff, markedly different in tone from the kind of book we are used to from Rankin, but welcome proof that he has much more than one string to his bow' GOOD BOOK GUIDE 'Rankin's superlative prose and well-crafted plot twists make this a must-read, especially for those still in mourning for the grumpy guy with a bus pass' — Shari Low DAILY RECORD 'Now Rankin has retired Rebus he can use his considerable talents to create standalone titles like this' THE INDEPENDENT 'Having retired Rebus, Rankin concocts a sharp, cleverly plotted, smartly paced criminal novel, throwing amateur crooks plannng an art theft to the professional sharks of Edinburgh's underworld' SAGA 'a compelling new departure for Scotland's king of crime' THE INDEPENDENT 'An amusing bloody tale of middle-class amateurs mixing it with the big boys to pull off an audacious art heist' EVENING STANDARD 'a gripping crime novel that gradually enmeshes the reader in its dark world of wrong choices and deception' DEADLY PLEASURES 'We love the thought that went into this Rankin release. He's a legend, and books like this prove why' U MAGAZINE 'Rankin has a seemingly effortless ability to tell a good and suspenseful yarn' — Barbara Fister MYSTERY SCENE

Born in the Kingdom of Fife in 1960, Ian Rankin graduated from the University of Edinburgh in 1982. His first Rebus novel was published in 1987, and the Rebus books are now translated into twenty-two languages and are bestsellers on several continents. He is the recipient of four Crime Writers’ Association Dagger Awards including the prestigious Diamond Dagger in 2005. In 2004, Ian won America’s celebrated Edgar Award for ‘Resurrection Men’. He recently received the OBE for services to literature, opting to receive the prize in his home city of Edinburgh, where he lives with his partner and two sons.