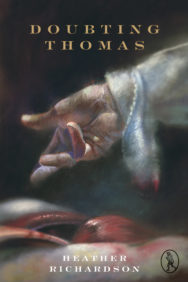 This is a story of sex, drugs and blasphemy in late seventeenth-century Edinburgh experienced through four viewpoints over fifteen years: Dr Robert Carruth, his wife Isobel, and university students Mungo Craig and Thomas Aikenhead.

After participating in the particularly gruesome autopsy of a pregnant prisoner, Robert is unable to consummate his marriage to Isobel. He buries himself in work, and his overzealousness contributes to the demise of a down-at-heel apothecary named James Aikenhead. Fifteen years pass and the apothecary’s son, Thomas, appears at the Carruths’ door seeking recompense for his father’s death. At his side is Mungo Craig, a cunning poet with dubious loyalties. The two insinuate their way into Robert and Isobel’s life, freshly exposing old fault lines in the Carruths’ marriage and subjecting them to dangerous new pressure.

“With an exquisite and faultless play of historical language, we witness the most visceral portrayals of early medical practices and a delicately drawn marriage, in which the fear of being different is wonderfully distilled. The childhood of Thomas Aikenhead, the last executed blasphemer in Britain, is also brilliantly created, along with the crucial betrayals that caused his downfall. This novel speaks loudly to our present condition.” – Derek Neale