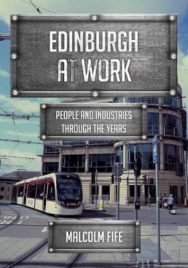 Home > Uncategorized > Edinburgh at Work: People and Industries Through the Years

Edinburgh at Work: People and Industries Through the Years

Edinburgh has always been different. It was affected less than any other city in Britain by the Industrial Revolution, remaining essentially professional rather than industrial, while enjoying a reputation as a hub of intellectual thought during the Scottish Enlightenment of the late eighteenth and early nineteenth centuries: Adam Smith, David Hume, James Hutton and James Watt are only a few of the many eminent thinkers associated with the city. It was also during this period that the city began to spread beyond the confines of the cramped Castle Rock tenements, extending northwards with the building of the Georgian New Town, and eventually swallowing up many smaller surrounding burghs, including the port of Leith.Edinburgh At Work explores the working life of this great city, from humble beginnings to its current status as the UK’s second financial centre after London and the fourth largest in Europe. In a fascinating series of contemporary photographs and illustrations it looks at the consequences of rapid urbanisation, the rise in the city’s economic fortunes through the nineteenth century, the rapid growth of tourism from the postwar period and the opening of the Scottish Parliament. Along the way it explores the development of Scotland’s capital from relative obscurity to international renown as home to the word’s largest arts festival and the strongest economy of any city in the UK outside London.