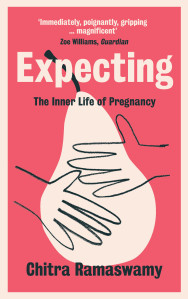 Home > Biography and Autobiography > Expecting: The Inner Life of Pregnancy

Expecting: The Inner Life of Pregnancy

“Writing of great insight, humour and emotional intelligence.” Kenny Farquharson, The Times. When Chitra Ramaswamy discovered she was pregnant, she longed for a book that went above and beyond a manual; a book that did more than describe what was happening in her growing body. One that, instead, got to the very heart of this overwhelming, confusing and exciting experience. Expecting takes the reader on a physical, emotional, philosophical and artistic odyssey through pregnancy. A memoir exploring each of the nine months of Chitra’s pregnancy, Expecting is a book of intimate, strange, wild and lyrical essays that pay tribute to this most extraordinary and ordinary of experiences.

Reviews of Expecting: The Inner Life of Pregnancy

"Chitra Ramaswamy is one of freshest new voices in British journalism, with a fine eye for detail and tone. She's one of the warmest writers on modern British family life." – Will Dean, The Guardian. "Like spending time with a particularly wise and funny friend. She brings clarity of thought and expression to the human condition in all its messy complexity. Writing of great insight, humour and emotional intelligence." – Kenny Farquharson, the Times. Winner, National Feature of the Year 2012, the Refugee Week Scotland Media Awards. Shortlisted several times for the Scottish Press Awards Magazine Writer of the Year and Newspaper Feature Writer of the Year. Nominated several times for the Edinburgh Festival Fringe Allen Wright Award recognising quality arts writing by journalists under 30. Columnist for six years in the Scotsman's award-winning magazine, Spectrum.

Chitra Ramaswamy is an award-winning journalist with more than ten years’ experience. She cut her teeth at The Big Issue before moving to The Scotsman, where she became one of the newspaper’s leading columnists, book reviewers, interviewers and feature writers. Now a freelancer, Chitra writes regularly for a number of publications, including The Guardian, and often chairs events at festivals and regularly reviews on radio. Expecting is her first book.