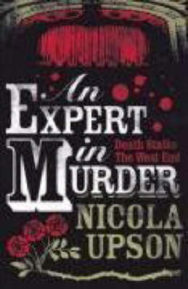 An expert in Murder is the first in a new series which features Golden Age crime writer Josephine Tey as its lead character, placing her in the richly-peopled world of 1930s theatre which formed the other half of her writing life, and using real events as the basis for an original murder mystery. It’s March, 1943, and Tey is travelling from Scotland to London to celebrate what should be the triumphant final week of her celebrated play, Richard of Bordeaux. The play has been the surprise hit of the season, with pacifist themes which strike a chord in a world still haunted by war, but a seemingly senseless murder – which takes place as soon as Josephine arrives in London and which Detective Inspector Archie Penrose feels sure is connected to her work – puts her reputation, and even her life, under threat. A second killing confirms Penrose’s suspicions that somewhere amongst this flamboyant theatre set is a ruthless and spiteful murderer. As his investigations lead him from the romance of the West End to the stark reality of the trenches, he must confront his own ghosts in a search for someone who will kill again to right the wrongs of a past generation.Cleverly blending fact and fiction, this book is both a tribute to one of the most enduringly popular writers of crime and an atmospheric detective novel in its own right.

Nicola Upson was born in Suffolk and read English at Downing College, Cambridge. She has worked in theatre and as a freelance journalist, and is the author of two non-fiction works and the recipient of an Escalator Award from the Arts Council England. Her debut novel, An Expert in Murder, was the first in a series of crime novels whose main character is Josephine Tey – one of the leading authors of Britain’s Golden Age of crime writing. She lives with her partner in Cambridge and spends much of her time in Cornwall, which was the setting for her second novel, Angel with Two Faces. Two for Sorrow is the third book in the Josephine Tey series, followed by Fear in the Sunlight.