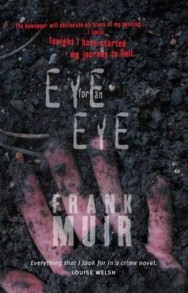 Home > Fiction from Scotland > Eye for an Eye

Eye for an Eye

When The Stabber’s sixth victim is found with his head nailed to the ground, DI Andy Gilchrist knows his failed investigation is about to cost him his career. The windswept streets of St Andrews provide the setting for the grisly attacks of an unhinged serial killer. Six men have been brutally murdered, all known wife beaters, stabbed through the left eye. Suspended from the case and desperate to redeem his reputation, Gilchrist embarks on a desperate hunt for the killer. Alone and on the wrong side of the law, any mistake could be his last.

Reviews of Eye for an Eye

'Detective Rebus has a new rival who's cleaner living and better looking than the hard-drinking cop. Gilchrist is a 'tall Tom Cruise'. ' THE SUN 'Everything I look for in a crime novel' Louise Welsh.'Rebus did it for Edinburgh. Laidlaw did it for Glasgow. Gilchrist might just be the bloke to put St Andrews on the crime fiction map.' DAILY RECORD 'a book which seeks to play with the reader's expectations of what a crime novel is supposed to be.' THE LIST

Frank Muir was born in Glasgow and plagued from a young age with the urge to see more of the world than the rain sodden slopes of the Campsie Fells. Twenty-five years of working overseas helped him appreciate the raw beauty of his home country. Now a dual US/UK citizen, living in Lenzie and working in the US, Frank is currently working on the third Gilchrist novel, Tooth for a Tooth.