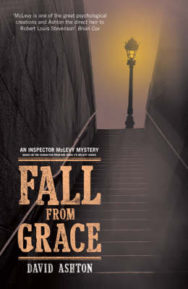 The second in a new series of McLevy books, “Fall from Grace” revolves around the terrible Tay Bridge disaster. The story begins with a break-in and murder at the Edinburgh home of Sir Thomas Bouch, the enigmatic, egotistical builder of the Tay Bridge. McLevy is brought in to investigate. With the help of brothel madam Jean Brash, McLevy finds the murderer, but there is much, much more to unfold: murder, arson, sexual obsession and suicide.

Reviews of Fall from Grace: An Inspector McLevy Mystery

David Ashton was born in Greenock in 1941. He studied at Central Drama School, London, from 1964 to 1967, and most recently appeared in ‘The Last King of Scotland’. David started writing in 1984 and he has seen many of his plays and TV adaptations broadcast – he wrote early episodes of ‘EastEnders’ and ‘Casualty’, and four McLevy series for BBC Radio 4. A 90-minute McLevy film has been commissioned by STV.