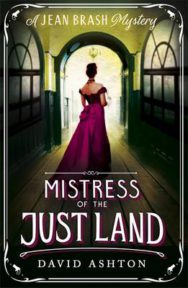 Home > Fiction from Scotland > Mistress of the Just Land

Mistress of the Just Land

The first book in a new series by the creator of Inspector McLevy. New Year’s Day – and through the misty streets of Victorian Edinburgh an elegant, female figure walks the cobblestones – with a certain vengeful purpose. Jean Brash, the Mistress of the Just Land, brings her cool intelligence to solving a murder, a murder that took place in her own bawdy-house (the best in Edinburgh and her pride and joy). A prominent judge, strangled and left dangling, could bring her whole life to ruin and she didn’t haul herself off the streets, up through low dirty houses of pleasure and violent vicious men – to let that come to pass. The search for the killers will take Jean back into her own dark past as she uncovers a web of political and sexual corruption in the high reaches of the Edinburgh establishment. A young boy’s death long ago is demanding justice but, as the body count increases, she has little time before a certain Inspector James McLevy, comes sniffing round like a wolf on the prowl. Jean may be on the side of natural justice but is she on the side of the law? Or will the law bring her down?

Reviews of Mistress of the Just Land

PRAISE FOR THE INSPECTOR McLEVY SERIES Mclevy is a sort of Victorian Morse with a heart, prowling the mean wynds and tenements of the endlessly fascinating city. David Ashton impeccably evokes Edinburgh so vividly that you feel the cold in your bones and the menace of the Old Town's steep cobbles and dark corners Financial Times An intriguing Victorian story… elegant and convincing The Times McLevy is one of the greatest psychological creations and Ashton the direct heir to Robert Louis Stevenson Brian Cox, CBE – Award-winning actor David Ashton's writing is excellent, his characters thoroughly convincing and his narrative grabs you The Sherlock Holmes Society Ashton's McLevy is a man obsessed with meting out justice and with demons of his own Scotsman A real page-turner Sunday Post

David Ashton was born in Greenock in 1941. He studied at Central Drama School, London, from 1964 to 1967, and most recently appeared in The Last King of Scotland. David started writing in 1984 and he has seen many of his plays and TV adaptations broadcast – he wrote early episodes of EastEnders and Casualty, and eleven McLevy series for BBC Radio 4. david-ashton.co.uk