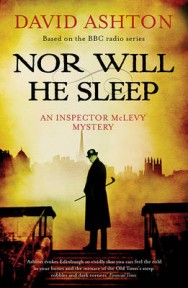 Home > Fiction from Scotland > Nor Will He Sleep: An Inspector McLevy Mystery

Nor Will He Sleep: An Inspector McLevy Mystery

1887. The streets of Edinburgh seethe with youthful anarchy as two rival gangs of students, Scarlet Runners and White Devils, try to outdo each other in wild exploits. After a pitched battle between them, an old woman is found savagely battered to death in Leith Harbour. Enter Inspector James McLevy, a little more grizzled, but unchanging in his fierce desire to mete out justice. As the inspector delves further he meets up with one Robert Louis Stevenson, author of Jekyll and Hyde, in the city to bury his recently deceased father.

Reviews of Nor Will He Sleep: An Inspector McLevy Mystery

David Ashton was born in Greenock in 1941. He studied at Central Drama School, London, from 1964 to 1967, and most recently appeared in The Last King of Scotland. David started writing in 1984 and he has seen many of his plays and TV adaptations broadcast – he wrote early episodes of EastEnders and Casualty, and six McLevy series for BBC Radio 4.