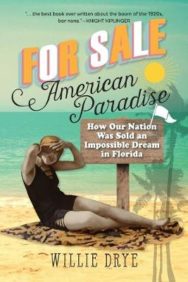 Home > History > For Sale — American Paradise: How Our Nation Was Sold an Impossible Dream in Florida

For Sale — American Paradise: How Our Nation Was Sold an Impossible Dream in Florida

Silver Medal Winner of the Independent Publisher Book Awards for Best Regional Nonfiction in the SoutheastThe story of how Florida became entwined with Americans’ 20th-century hopes, dreams and expectations, and how it was the site of mass delusion, real estate collapses, and catastrophic hurricanes. For Sale–American Paradise focuses on the experiences of William Jennings Bryan and Edwin Menninger, who were among the people who shaped the image of Florida that we know today and who sold that image as America’s paradise. It’s also a tale of the euphoria and mass delusion that inevitably happens when times are good and people convince themselves that they’ve found a foolproof way to have it all, have it now, and keep it forever.

Reviews of For Sale — American Paradise: How Our Nation Was Sold an Impossible Dream in Florida

In the early years of the twentieth century, it took the efforts of some very determined people – including William Jennings Bryan and Henry Flagler, cofounder of Standard Oil – to draw the country's attention to the state of Florida, which so the claims went, represented a huge opportunity for real-estate investors. In addition to developers, the relatively untamed state also attracted the attention of the criminal element: religious leader and Hollow Earth proponent Cyrus Teed; outlaw bank robber, murderer, and pop-culture hero John Ashley; and of course, furniture salesman Al Brown, who's probably better known by his real surname, Capone. This lively, fascinating look at Florida's early years profiles all these figures and describes not only the early growth but also the bursting of the bubble in the late 1920s, the result of a declining economy, the increasing profile of the crooks, and a hurricane that destroyed entire cities. Revealing reading for anyone interested in early-twentieth-century American history, boom-and-bust stories, and tales of outlaws. * Booklist * Drye (Storm of the Century) weaves stories of economic development, railroad construction, and outlaw behavior in this tale of Florida's early boom years and the ensuing hurricane-triggered bust. On paper, Florida didn't look like the most inviting of locales when it became a state in 1845. Hurricanes, roaring heat, alligators, and the impenetrable Everglades were enough to keep most folks away. In 1867, Harriet Beecher Stowe built a winter home near Jacksonville and began to sing Florida's praises with rhapsodic descriptions of the state's natural beauty, setting in motion a series of dispatches by Ulysses S. Grant, William Jennings Bryan, Warren G. Harding, and others encouraging northerners to consider the state as a vacation or respite destination-Miami in particular. A period of rapid growth followed, with roads and railroads connecting Miami to the Florida Keys as well as one carved through the formidable Everglades connecting Fort Myers to Miami, further enabling economic development. A lax attitude toward Prohibition didn't hurt either. Drye has clearly done his research, but his narrative can be jarring with few segues between narrative threads. Still, Floridians, snowbirds and historians are sure to appreciate the story behind one of America's most famous vacation spots. * Publishers Weekly * "Check out For Sale: American Paradise. Drye tells history the way it should be told." * Florida Times-Union * National Geographic News contributing editor Drye (Storm of the Century) paints 1920s South Florida as a phantasmagoria-a commodified fantasy peddled by an elite so as to exploit the masses. As William Jennings Bryan and other public figures boosted Florida for its warm climate and leisurely lifestyle, real estate speculators sold off undeveloped swampland to gullible northerners for wildly inflated prices. In time the market crashed because, in the words of one speculator, "we just ran out of suckers." Hurricanes also disrupted this metanarrative of paradise, devastating Miami in 1926 and inundating the Lake Okeechobee region in 1928. But state and business leaders downplayed the impact as "negligible," lest reports of thousands of corpses floating in the sugarcane fields scare off tourists. Meanwhile, Florida crime shifted from charismatic bootleggers and bandits such as John Ashley, who robbed banks and then fled to hideouts deep in the Everglades, to organized crime-Chicago mobster Al Capone wintered in Miami. Drye expertly weaves entertaining anecdotes and local color into his narrative, which often reads like a Carl Hiaasen novel. VERDICT This broadly appealing history book entertains and informs with its portrait of Florida as commodified fantasy, business enterprise, and disaster zone.-Michael Rodriguez, Hodges Univ. Lib., Naples, FL * Library Journal * "A fun read and a very interesting and engaging book. For Sale-American Paradise is a paradigmatic American story–looking for the good life. It captures a ton of this deep American restlessness, idealism and determination." William J. Bennett, host of Bill Bennett's Morning in America

Willie Drye has been a journalist for thrity-three years and is a contributing editor for National Geographic News. His first book Storm of the Century: The Labor Day Hurricane of 1935, was made into a documentary for the History Channel. He lives in North Carolina, dividing his time between Plymouth and Wilmington.