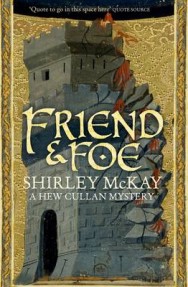 St Andrews, 1583. The young king James VI is confined at Falkland palace, plotting his escape. Dissension rages between Kirk and Crown, the king and his ‘lord enterprisers’, and between the separate factions of the church. In St Andrews Castle, a bishop in decline plays out his darkest fantasies, while Hew and his friend Giles investigate the true source of his sickness, uncovering corruption at its heart. The death of a young soldier, implicating Hew’s sister and Giles’s wife Meg, leads Hew to an astonishing discovery, and towards his blackest hour, his fortunes inextricable from those of James himself. Real historical figures interwoven in this fantastical tale are James VI, the bastard son of James V, spymaster Sir Francis Walsingham and Alison Pearson who was executed for witchcraft in 1588.

Shirley McKay was born in Tynemouth but now lives with her family in Fife. At the age of fifteen she won the Young Observer playwriting competition, her play being performed at the Royal Court Theatre Upstairs. She went on to study English and Linguistics at the University of St Andrews before attending Durham University for postgraduate study in Romantic and Seventeenth Century prose. She was shortlisted for the CWA Debut Dagger. Shirley works as a freelance proofreader.