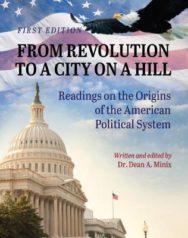 Home > Politics, Current Affairs and Ideas > From Revolution to a City on a Hill: Readings on the Origins of the American Political System

From Revolution to a City on a Hill: Readings on the Origins of the American Political System

The anthology From Revolution to a City on a Hill: Readings on the Origins of the American Political System introduces students to fundamentals of the American political system and addresses both historical and contemporary issues. Readers become familiar with standard documents such as the Declaration of Independence, the Federalist Papers, and the Articles of Confederation, but also benefit from exposure to outstanding writing from scholarly works on issues such as voting behavior, the Fourth Estate, and American political behavior.The book opens with an examination of the founding of the country and the Constitution. Subsequent chapters examine Federalism, civil liberties and civil rights, the impact of public opinion, and the media and politics. The text also addresses political parties and interest groups, campaigns and elections, Congress, the federal bureaucracy, federal courts, and the Supreme Court.Developed to help students not only fully understand the national government, but learn to evaluate its proper role and scope, From Revolution to a City on a Hill is well suited to survey courses in political science, American government, and United States history.

Dean A. Minix, who earned his Ph.D. at the University of Cincinnati, has taught in China and Egypt and worked with the Department of State in the diplomat-scholar program on the Lebanon desk. Dr. Minix has written extensively topics including the global war on terror and domestic terrorism. He is the author of Small Groups and Foreign Policy Decision-Making, and (with Dr. Sandra Hawley) Global Politics.