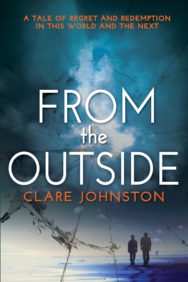 Home > Fiction from Scotland > Adventure/Thriller > From the Outside

When internet millionaire and philanthropist Harry Melville dies in a car crash at the age of forty four, the lives of his wife, Sarah, and twin brother, Ben, are thrown into turmoil.

Harry seemed to have it all, a close-knit family and a happy marriage – along with all the trappings of wealth. Yet as he recalls his past from the afterlife, a story emerges of the unspoken and bitter jealousies between brothers and of an unhappy wife burdened by loneliness and guilt.

When Ben takes over the running of Harry’s charity foundation he begins to find purpose for the first time in years. But the arrival of a talented young artist brings a series of revelations that expose Harry’s complex and dual personality in full. As he learns his part in the suffering of those he left behind, is it too late for Harry to make amends?

A tale of regret and redemption in this world and the next. From the Outside looks at the futile rivalries that can destroy sibling relationships and the lost opportunity for happiness when ego is allowed to reign over emotion.

Clare Johnston is a journalist and content specialist, and a frequent contributor on radio and TV, having appeared on Radio 4’s Woman’s Hour, The Kaye Adams Programme and comedy satire show Breaking the News on BBC Radio Scotland, along with STV2’s Live at Five. She is a former editorial director of Press Association Scotland and commercial editor and columnist with the Daily Record. She is currently working with the DC Thomson media group, and supports businesses with communication and content creation.