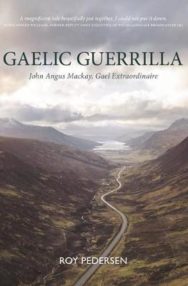 Home > Biography and Autobiography > Gaelic Guerrilla: John Angus Mackay – How He Won the Gaelic Television and Much Much More

Gaelic Guerrilla: John Angus Mackay – How He Won the Gaelic Television and Much Much More

This book describes the astonishing achievements of John Angus Mackay – a man whose intelligence, humanity, political nous, people skills, wit, steely resolve and courage, were such that, what lesser beings regarded as impossible, he made possible.Through his efforts in concert with a small group of others, a thousand year process of `ethnic cleansing’ of the Gaelic language and culture was challenged and new means created to rebuild that which the powers-that-be had long sought to destroy. These efforts were so successful that now, the Scottish Gaelic language and culture has turned the corner and the number of young Gaelic speakers is increasing.How this was achieved, against a sustained barrage of negativity, is described, but perhaps his most obvious achievement is his long, dogged and forensically focused campaign, against huge establishment resistance, to win a Gaelic television channel. That channel now provides a fascinating range of programming at times attracting viewership figures well in excess of the total number of Gaelic speakers in Scotland.But that is only part of the story. John Angus was also a gifted teacher, pivotal in developing community co-operatives in his native Lewis, in paving the way for the creation of the Crofters’ Union and leading the development of the Gaelic Comunn na Gaidhlig, Bord na Gaidhlig, An Lanntair multi-arts venue, the University of the Highlands and Islands, and as its chairman, in turning round NHS Western Isles from crisis into a model small health board.

Roy Pedersen was born in Ayrshire and brought up in Aberdeen where he graduated with an MA in Geography and Economic History. After a brief spell in London, where he created and published the first and best selling Gaelic map of Scotland, he has spent most of his working life based in Inverness. There he pursued a successful career in the economic, social and cultural development with the Highlands and Islands Development Board, in the course of which, he was the architect of the ferry charging system, “Road Equivalent Tariff” (RET). He was also intimately involved with the Community Co-operative Scheme and revival of Gaelic. More recently he has been proprietor of a consultancy business, has served as a Highland councillor and has authored several books including the acclaimed critique of Scottish ferry policy – Who pays the Ferryman? He is chair of Ainmean-Aite na h-Alba, Gaelic Place-names of Scotland, and serves on the Scottish Government’s Ferry Industry Advisory Group.