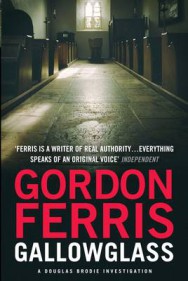 Douglas Brodie is dead. The Glasgow Gazette announced the tragic death on 26 June 1947 of their chief crime reporter. Just three weeks before, life was rosy. After a tumultuous winter chasing war criminals across Glasgow, Douglas Brodie was revelling in the quiet life. His relationship with advocate Samantha Campbell was blossoming and he’d put the reins on his impulsiveness. Hope and promise filled the tranquil summer air. A day later, Brodie was arrested for the kidnap and murder of Scotland’s top banker. The case against Brodie is watertight: caught with a gun in his hand next to a man with a bullet in the head – from Brodie’s own revolver. He has no alibi. No witnesses. Despite Samantha’s best efforts, Brodie faces the gallows. Is this the sordid end for a distinguished ex-copper, decorated soldier and man of parts?

Gordon Ferris is an ex-techie in the Ministry of Defence. He is the author of the No. 1 bestselling e-book The Hanging Shed.