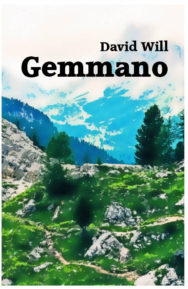 Northern Italy, 1944: Gemmano is on the front lines of the battle for the Gothic Line, trapped between German occupation and the allied advance, as shell after shell rains down on the village.

Eighteen  year  old  Toni  Mazzanti  has  always  been  considered  ‘odd’ by the villagers, but as the battle rages and he comes to terms with his personal and spiritual development, his talents come to be viewed as gifts.

With his new found confidence Toni increasingly emerges as a village leader, aided by Lorenzo Bergamas, a young Italian soldier returning from the Front.

Covering  a  period  of  ten  days,  Gemmano  is  a  compelling  and inspiring  story  of  people  caught powerless  in  their  own  land,  told from the perspective of two young Italian men.

David Will was born and raised in Edinburgh but has lived and worked extensively in Australia, China and Italy. He now lives in Devon.

His father fought with the London Scottish in the Gemmano campaign and this novel is based on a detailed diary he kept of the terrible fighting that went on over a period of two weeks.

The local Commune has also published a comprehensive account of the battle, and together with his father’s diary, this has provided a rich source of material for David.