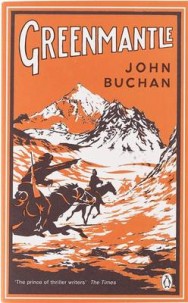 In “Greenmantle” (1916), Richard Hannay, hero of “The Thirty-Nine Steps”, travels across war-torn Europe in search of a German plot and an Islamic Messiah. He is joined by three more of Buchan’s heroes: Peter Pienaar, the old Boer Scout; John S. Blenkiron, the American determined to fight the Kaiser; and, Sandy Arbuthnot, Greenmantle himself, modelled on Lawrence of Arabia. The intrepid four move in disguise through Germany to Constantinople and the Russian border to face their enemies: the grotesque Stumm and the evil beauty of Hilda von Einem.

John Buchan was born in Perth. His first success as an author came with Prester John in 1910, followed by a series of adventure thrillers, or ‘shockers’ as he called them, all characterized by their authentically rendered backgrounds, romantic characters, their atmosphere of expectancy and world-wide conspiracies, and the author’s own enthusiasm. There are three main heroes: Richard Hannay, whose adventures are collected in The Complete Richard Hannay; Dickson McCunn, the Glaswegian provision merchant with the soul of a romantic, who features in Huntingtower, Castle Gay and The House of the Four Winds; and Sir Edward Leithen, the lawyer who tells the story of John MacNab and Sick Heart River, John Buchan’s final novel.