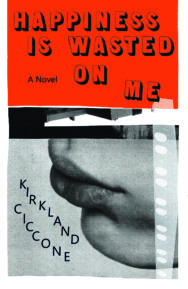 Home > Fiction from Scotland > Happiness is Wasted on Me

Happiness is Wasted on Me

Cumbernauld was built to be the town of the future…that is, if the future looked like a really rubbish episode of Doctor Who. It’s also home to Walter Wedgeworth, a child stuck in a uniquely dysfunctional family controlled by the tyrannical Fishtank, whose CB Radio aerial is a metal middle finger to all the neighbours on Craigieburn Road.When 11-year-old Walter discovers the corpse of a baby inside a cardboard box, he resolves to ignore it, pretend it didn’t happen. He knows the price of being a grass. But the child’s fate haunts Walter, bringing him into conflict with the world around him. Walter’s journey will lead him from childhood to adulthood; school, college, bereavement, Britpop, his first job, Blackpool, the Spice Girls, feuds with his neighbour, and finally…face-to-face with a child killer.Taking place in the 90s, Happiness Is Wasted On Me is a genre-blending tale that spans a decade in the life of Walter. It’s a coming of age tale, a family drama, a mystery, and a biting dark comedy. Ultimately, it’s the story of how even the strangest people can find their way in the world.

Kirkland Ciccone is a punk, an author, and a performer who has toured across the country in theatres, libraries, and schools. From the moment his mother sent him up to the Post Office with the Family Allowance book, Kirkland knew books would loom large in his life. One of his first jobs was a psychic consultant, that is if telling everyone they were going to meet a tall, dark, handsome stranger counts as seeing the future.He trained in journalism and PR but quickly discovered live storytelling and writing stories made him happier than interviewing people at Car Boot Sales. He has guested on Janice Forsyth’s Culture Cafe (BBC Radio Scotland) and Scotland Tonight (STV). He has also appeared at several festivals including The Edinburgh Book Festival, ReImagination, and Tidelines.With the help of Cumbernauld Theatre, Kirkland also set up Yay YA, a book festival to encourage teens to get off their phones and read books. Other live shows include A Secret History of Cumbernauld, Kirkland Ciccone Plays Pop, and The Dead Don’t Sue. He has previously written quirky fiction for younger readers including Conjuring The Infinite and Glowglass.