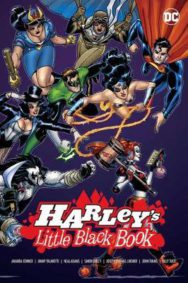 She’s the psychopathic psychotherapist with a heart of gold and a mind for mayhem. Now she’s uniting with the greatest heroes in the DC Universe in her very own team-up title. Ain’t it amazing?With the Joker firmly in her rearview mirror, Harley Quinn has become an antihero like no other. But sometimes she runs into threats too, uhh, threatening for any one person to beat. That’s when she turns to a who’s who of the biggest, baddest, most bodacious heroes in the whole universe!Superman. Wonder Woman. Green Lantern. Zatanna. Lobo. And…Harley Quinn??? Whoever’s tagging along, there’s one thing for sure- Wherever Harley goes, high-octane hijinks are sure to follow! Collects the full six-issue miniseries.

Jimmy Palmiotti is a multi-award-winning comic book creator with a wide range of experience in advertising, production, editorial, film writing and production, media presentation and video game development. He has created and co-created numerous series and characters, including The New West, THE MONOLITH, 21 DOWN, THE RESISTANCE, Gatecrasher, Beautiful Killer, Back to Brooklyn, The Tattered Man and Painkiller Jane. He has co-written DC’s ALL-STAR WESTERN and BATWING with Justin Gray, as well as HARLEY QUINN and STARFIRE with Amanda Conner.Amanda Conner started out in comics after working as an illustrator for New York ad agencies. However, loving comic books and cartooning the most, Amanda found work at Archie, Marvel and Claypool Comics early in her career. She’s probably best known for her work on Vampirella for Harris Comics, as well as Painkiller Jane, CODENAME KNOCKOUT, BIRDS OF PREY, and the creator-owned books Gatecrasher and The Pro (with Jimmy Palmiotti and Garth Ennis).