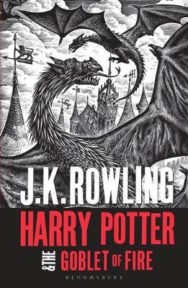 Home > Children's > Fiction > Harry Potter and the Goblet of Fire

Harry Potter and the Goblet of Fire

`It matters not what someone is born, but what they grow to be’ Albus DumbledoreWhen the Quidditch World Cup is disrupted by Voldemort’s rampaging supporters alongside the resurrection of the terrifying Dark Mark, it is obvious to Harry Potter that, far from weakening, Voldemort is getting stronger. Back at Hogwarts for his fourth year, Harry is astonished to be chosen by the Goblet of Fire to represent the school in the Triwizard Tournament. The competition is dangerous, the tasks terrifying, and true courage is no guarantee of survival – especially when the darkest forces are on the rise.These adult editions have been stylishly redesigned to showcase Andrew Davidson’s beautiful woodcut cover artwork.

Reviews of Harry Potter and the Goblet of Fire

And you thought wizardry was for children. Harry Potter will make you think again. He casts his spells on grown-ups too * James Naughtie * Every bit as good as Potters 1 through 3 * Stephen King * Harry's – and our – fourth year at Hogwarts is funny, full of delicious parodies of our own world, and wildly action-packed * The Times * One of the greatest literary adventures of modern times * Sunday Telegraph * Spellbinding, enchanting, bewitching stuff * Mirror *