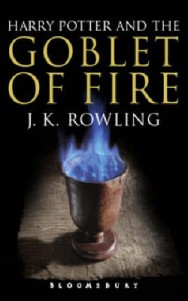 Home > Fiction from Scotland > Harry Potter and the Goblet of Fire: Adult Edition

Harry Potter and the Goblet of Fire: Adult Edition

When the Quidditch World Cup is disrupted by Voldemort’s rampaging supporters and the terrifying Dark Mark is resurrected, it is obvious to Harry that, far from failing, Voldemort is getting stronger. The ultimate symbol to the magic world of the evil Lord’s return would be if the one and only survivor of his death curse, Harry Potter, could finally be beaten. So when Harry is entered for the Triwizard Tournament – a competition between three wizarding schools to find the ultimate magician – he knows that rather than win it, he just has to get through the trials alive.

Reviews of Harry Potter and the Goblet of Fire: Adult Edition

'Every bit as good as Potters 1 through to 3' Stephen King 'There isn't a dull page … The plot fits together like a wondrous jigsaw' Sunday Express 'The story is compelling: the humour satisfyingly anarchic, the moral stance reassuringly strong … her best book yet' Sunday Telegraph 'The dazzling plot and pace are more impressive than ever … there's simply too much to praise. On yer broomstick! Go get! Go read!' Irish Times