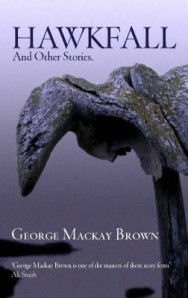 He was dead. The spirit of the Beloved One had gone on alone into the hall of death. His body was left to them for seven days yet so that they might give it a fitting farewell. Now it was time for it too to be sent after. The priests washed his old frail bluish body with water that had been drawn at sunrise. They arrayed him in his ceremonial vestments: the dyed woollen kirtle, the great gray cloak of wolfskin, the seelskin slippers. Across his breast they laid his whalebone bow, with seven arrows of larch. In his right hand they put the long oaken spear. The old mouth began to smile in its scant silken beard, perhaps because everything was being done well and according to the first writings. Now it was time. All was ready.

'Incantatory but down-to-earth, profound and often funny' – Sunday Telegraph 'At his best, Brown is Brown is a prose Hopkins, concerned with inscape, landscape turned inside-out, the rhythms informing the shape of things we see' – Robert Nye, The Guardian 'what illuminates and pleases, apart from the speech of his characters and the poetic imagery, is the insight into people' Iain Crichton Smith – The Scotsman

George Mackay Brown is one of the major Scottish literary figures of the twentieth century. A prolific poet and novelist, he took much of his inspiration from the myths and landscape of Orkney, and also from his deep Catholic faith. His collection of short stories A Time to Keep (1971) won the Katherine Mansfield Mentor short story prize and his novel Beside the Ocean of Time was shortlisted for the Booker Prize in 1994. He died in 1996. Andrew Greig (b. 1951) is one of the leading Scottish writers of his generation. He has published six collections of poetry, including Men on Ice and The Order of the Day (Bloodaxe). He has written two books on his expeditions to the Himalayas and four novels, including Electric Brae and That Summer. He divides his time between Orkney and Sheffield.