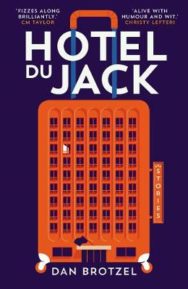 A woman granted a superpower discovers it’s more trouble than it’s worth. A neighbourhood forum becomes the setting for a bizarre ghost story. A children’s entertainer wrestles with problems that are nothing to joke about. A harassed dad attempts to meet the challenge of the primary school cake competition.By turns tender and satirical, witty and bizarre, the stories in this debut collection cast a fresh eye on first-world problems. Funny and humane, they zoom in on the absurdities and poignancies in work, family, love and loss in our frenetic modern lives.

Dan Brotzel’s stories have appeared in Pithead Chapel, Ellipsis Zine, Reflex Fiction, Cabinet of Heed, Lucent Dreaming, Bending Genres, The Esthetic Apostle, Spelk, The Ginger Collect and Fiction Pool. He won the 2018 Riptide Journal short story competition, was runner-up in the 2019 Leicester Writes competition, and was highly commended in the Manchester Writing School competition 2018. He is also co-author of a comic novel-in-emails about an eccentric writers’ group, Kitten on a Fatberg (Unbound).He lives in London with his partner Eve and their three children – Isla, Poppy and Huw.