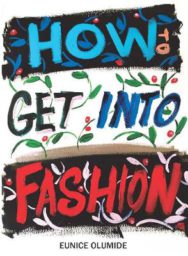 Home > Uncategorized > How to Get into Fashion: A Complete Guide for New Faces, Models and Creative Talent

How to Get into Fashion: A Complete Guide for New Faces, Models and Creative Talent

In her new book, supermodel Eunice Olumide MBE gives the lowdown on what it really takes to land a dream job in fashion. She has graced catwalks all over the globe and worked with top design powerhouses including Christopher Kane, Harris Tweed, Alexander McQueen and Mulberry. `How To Get Into Fashion’ is a treasure trove of insider advice from someone who’s been there and done it. Eunice makes every aspect of the business accessible to readers. She opens a window to her profession and, with the help of stunningly beautiful photographs, paints as clear a picture as possible of what it’s like to work in the realm of haute couture.

Born in Edinburgh, supermodel Eunice Olumide has worked all over the world. Twice nominated by the Scottish Fashion Awards and Vogue.com as `Model of the Year’She has appeared in both national and international campaigns, fashion weeks and editorials such as ID Magazine, Dazed & Confused, New York Magazine, Vogue, Italian Vogue, and many more. Walking for designer’s including Mulberry, Alexander McQueen, Christopher Kane, and Harris Tweed.Much of her career has been spent fundraising for charities including Children’s Hospice Scotland, Vivienne Westwood’s Climate Revolution, Fuel Poverty Action as well as working with big brands including Loreal. She is currently the Ambassador for Zero Waste Scotland and Breakthrough Breast Cancer TLC, joining the ranks of Kate Moss, Edith Bowman, Twiggy.