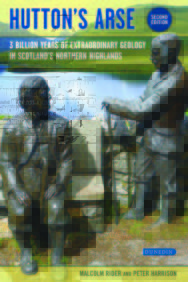 The extraordinary and beautiful scenery of the Northern Scottish Highlands has been created by a geological history lasting over three billion years. The new and thoroughly up-dated edition of this popular book takes its readers through those three billion years, shows the rocks, visits the places, introduces some famous researchers and presents the geological theories that have been inspired by the Highlands. Even though the influence of this magnificent place can be overwhelming, the book is about geology and the modern science involved. It is written for all to understand. It is a book for non-specialists interested in modern science, scientists and all lovers of the Northern Scottish Highlands.

The text is sometimes light-hearted, but the science is serious. The subjects covered are as wide as he the splitting open of the North Atlantic Ocean: a time when the Earth resembled modern Mars; early continent formation; billion year old bacteria; the very beginnings of human evolution; Snowball Earth; and, inevitably, climate change. This is modern science wrapped up in good writing and humour: a rare combination.

For over 30 years Malcolm Rider has been involved in the hydrocarbon industry, working first for a major company and then running his own consultancy business. He is still very much active in the industry, travelling the world presenting specialist courses and advising on oil exploration techniques. Peter Harrison has lived for 40 years in the north west Highlands working as a teacher and geoscience educator. He wishes to share the inspiration of this thought provoking landscape; Peter leads geotours for the North West Highlands UNESCO Global Geopark.