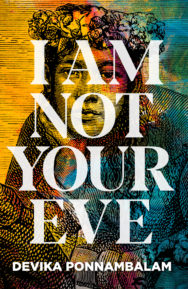 Home > Fiction from Scotland > Literary Fiction > I Am Not Your Eve

I Am Not Your Eve

I Am Not Your Eve is the story of Teha’amana, Tahitian muse and child-bride of the painter Paul Gauguin. She shares her thoughts as he works on one of his masterpieces, The Spirit of The Dead Keeps Watch, a work so important to Gauguin that it haunts his later self -portrait. As Teha’amana tells her story, other voices of the island rise: Hina goddess of the moon, a lizard watching from the eaves, Gauguin’s mask of Teha’amana carved from one of the trees.

Woven in are the origin myths that cradled Polynesia before French colonists brought the Christian faith. Distant diary entries by Gauguin’s daughter Aline – the same age as her father’s new ‘wife’ – recall the other hemisphere of his life. This is a novel that gives Teha’amana a voice: one that travels with the myths and legends of the island, across history and asks now to be heard.

Devika was born in Bandar Seri Begawan, Brunei in 1969, came to the UK at 8 and grew up in London. She graduated from the National Film & TV School with an award-winning short film. She has directed for mainstream TV in the UK & Malaysia. In 2004 she graduated with an MA in Creative Writing from the University of East Anglia, where she began writing this book. IN 2018 she travelled to Tahiti with the assistance of a research grant awarded by Creative Scotland. She lives in Edinburgh.