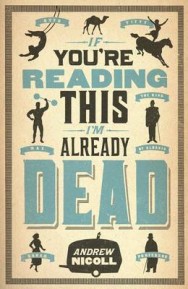 ‘I want people to know how Otto Witte, acrobat of Hamburg, became the crowned king of Albania.’ Otto Witte is an old man. The Allies are raining bombs on his city and, having narrowly escaped death, he has come home to his little caravan to drink what remains of his coffee (dust) and wait for the inevitable. Convinced that he will not see the sunrise, he decides to write the story of his life for the poor soul who finds what’s left of him come the morning. And it’s quite a story. Years earlier, when he was in either Buda or Pest, working at the circus, a dear friend brought him the newspaper. Inside was an article about how Albania was looking for a particular Turkish prince, because the country was in need of a new king. This Turkish prince is the image of Otto…A plan is formed; adventure, disaster, love and sheer, unabashed hope await. If You’re Reading This, I’m Already Dead is a joy to read; accomplished and full of the warmth, honesty and lightness of touch for which Andrew Nicoll is known and loved.

Reviews of If You’re Reading This, I’m Already Dead

'A life-enhancing storyteller, of stellar wit and intriguing depth' Sebastian Barry. 'a joyously farcical romp of a story, charmingly narrated' Bookbag. 'Like Renton in Irvine Welsh's Trainspotting or John Self in Martin Amis's Money stayed in the head after I closed the book, Otto is in there too now, laughing his head off and sitting on a camel' Big Issue. 'one of the many pleasures of this novel is to be found in Andrew Nicoll's assured mastery of tone' Scotsman. 'As wacky and entertaining as a night in the company of the Barnum and Bailey circus' Daily Record. 'Nicoll uses dark humour to great effect' Edinburgh Journal. 'Nicoll has created a marvellous novel, breathless in its pace, assured in its structure, and by turns witty and intelligent. Sometimes both' Herald. 'Nicoll offers his readers a jeu d'esprit of character and plot, which celebrates the art of storytelling' Book Oxygen. 'It's not often that a book actually merits the breathless 'I couldn't put it down' of back-cover blurbs, but this one does' The Scots Magazine.

After a brief stint as a lumberjack, Andrew Nicoll has spent his working life as a journalist. He has had short stories published in New Writing Scotland. His first novel, The Good Mayor won the Saltire First Book Award and has been translated into twenty languages. If You’re Reading This, I’m Already Dead is his third novel. He is married with three children and lives in Broughty Ferry, Dundee.