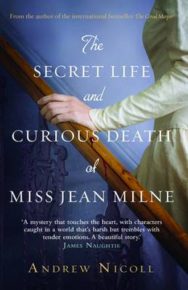 The Secret Life and Curious Death of Miss Jean Milne

A woman murdered. A crime unsolved. A mystery that has lasted a century. A hundred years ago, the true story of the brutal murder of Miss Jean Milne in a small seaside town captured the imagination of the whole country. A wealthy spinster who lived alone in a crumbling mansion, Miss Milne appeared to be the very model of respectability. But, behind the facade, Miss Milne was living a secret life. For a century, her murder has gone unsolved. Why was this quiet spinster tied up in her own home, tortured and brutally murdered? Who could have committed such a heinous crime in this quiet little town? Now, using newly-released evidence from police files, eye witness testimony hidden for a century and long forgotten newspaper reports from the scene, Andrew Nicoll has brought the case back from the dead to reveal the secrets of the little town where Jean Milne was murdered – the little town where he has spent his life. And the evidence has revealed that the quiet spinster found tied and tortured to death was not all that she seemed.Set in the heart of one of the wealthiest communities in the world, at the very height of the British Empire, it’s a shocking tale of class division, money, sex, lies, betrayal and murder.And, at last, after a hundred years, the curious death of Miss Jean Milne may finally have found a solution.

After a brief stint as a lumberjack, Andrew Nicoll has spent his working life as a newspaper journalist. His first novel, The Good Mayor, was an international bestseller. Andrew is married with three children.