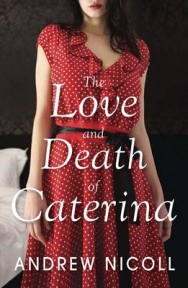 Home > Fiction from Scotland > The Love and Death of Caterina

The Love and Death of Caterina

Luciano Hernando Valdez is his Latin American nation’s most celebrated novelist and he’s suffering from writer’s block. So far his latest great work comprises the words ‘The scrawny yellow cat crossed the road’. He’s tried all his usual tricks to get back on track – he’s had a few debates with his trusty colleagues at the university, he’s had an affair with the banker’s wife, nothing will work. Until he meets Caterina. Beautiful, young and one of his biggest fans, she has idolised him since she was a child and he has inspired her to write. Convinced that falling in love with her, spending every minute he can alongside her, moulding her to his world, will unlock something and enable him to write, he pursues her and soon enough, he falls headlong into her arms. But it’s only a matter of time before he murders her.

Reviews of The Love and Death of Caterina

'It's a deft romance, an exercise in camp, and a fable about male pride and its pitfalls … very readable' The Guardian. 'It's a gripping and impressive piece of work, at times creating a sense of horror at the sheer convenience of political conformity' Times Literary Supplement. '…the pages turn quickly, the plot thickens and rises, and when the book is finally put down, there is little to stop you looking forward to Nicoll's next one' Scottish Review of Books. 'A very fine novel … intelligent, imaginative, accomplished, rich in sympathy and irony' Allan Massie, Scotsman. 'beautifully written with an evocative narrative' Sunday Herald.

After a brief stint as a lumberjack, Andrew Nicoll has spent his working life as a journalist. He has had short stories published in New Writing Scotland. His first novel, The Good Mayor won the Saltire First Book Award and has been translated into twenty languages. If You’re Reading This, I’m Already Dead is his third novel. He is married with three children and lives in Broughty Ferry, Dundee.