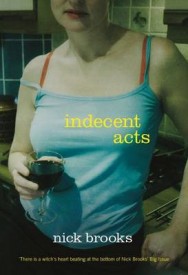 An extraordinary achievement and change of direction for Brooks, in this, his third novel. Reported entirely by the protagonist, Grace, a semi-illiterate 40-something mother from Drumchapel, one of Glasgow’s most notorious schemes, this is a story soaked in humour and empathy as we follow Grace’s attempts to hold together her precarious, chaotic family life. Grace cares for Sean, her grandson, and Vincent, her son, who wants to join the army. She lives in fear that Francis, her drug-addicted daughter and mother to Sean, will come back and take the boy away. In the spirit of The True History of the Kelly Gang by Peter Carey, the novel is written in Grace’s inimitable misspelt patois, with hilarious and moving effect. Indecent Acts is a glorious exploration of ‘real’ working class life, of family ties and tensions, memory, riotous misadventure and ultimate redemption.

PRAISE FOR NICK BROOKS'S THE GOOD DEATH: 'Brooks has a good eye for dialogue… a cracking good read' Manchester Evening News 'Brooks's humour is as sharp as one of Kay Scarpetta's scalpels, it slices through a tale that is sometimes disgusting, occasionally bewildering but always absorbing' Louise Welsh PRAISE FOR NICK BROOKS'S MY NAME IS DENISE FORRESTER 'Loads of assurance, buckets of colour, packed with beautifully etched observation and piles of raw honesty – this is a debut that keeps you wide-eyed with admiration – I loved its bravura – a compact gem.' Scotsman 'It's a strange, funny and capricious book – it will make you sad, but it will also make you laugh out loud.' Belfast Telegraph

Nick Brooks was born and still lives in Glasgow. He achieved a First Class Honours Degree in English from Glasgow University, where he also graduated from the MLitt in Creative Writing. He has worked in a variety of jobs, including musician, cartoonist and stained glass window maker. Nick’s first novel was My Name is Denise Forrester, published by Phoenix Press in 2005 and his second, The Good Death, published by Weidenfeld and Nicolson in 2006. He has been studying for a PhD at the University of the West of Scotland.