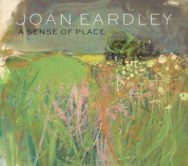 Joan Eardley: A Sense of Place

Joan Eardley (1921-1963) is one of Scotland’s most admired artists. During a career that lasted barely fifteen years, she concentrated on two very distinct themes: children in the Townhead area of central Glasgow, and the fishing village of Catterline, just south of Aberdeen, with its leaden skies and wild sea. The contrast between this urban and rural subject matter is self-evident, but the two are not, at heart, so very different. Townhead and Catterline were home to tight-knit communities, living under extreme pressure: Townhead suffered from overcrowding and poverty, and Catterline from depopulation brought about by the declining fishing industry. Eardley was inspired by the humanity she found in both places. These two intertwining strands are the focus of this book, which looks in detail at Eardley’s working processes. Her method can be traced from rough sketches and photographs through to pastel drawings and large oil paintings. Identifying many of Eardley’s subjects and drawing on unpublished letters, archival records and interviews, the authors provide a new and remarkably detailed account of Eardley’s life and art.