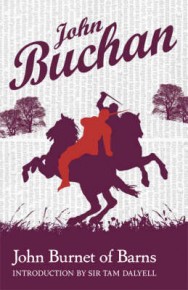 “John Burnet of Barns” was Buchan’s first fully realised, full-length work of fiction. It tells the story of two young noblemen – John Burnet, heir to the ancient house of Barns the last in a long line of Border reivers, and his cousin, Captain Gilbert Burnet, a dashing, ruthless soldier. Their lifelong rivalry results in treachery, betrayal and a desperate struggle for survival.

Reviews of John Burnet of Barns

'Buchan knew that you can't buck the consequences of your actions, and that your life is what you make of it. Perhaps his peculiarly Scottish combination of Romanticism and Calvinism – daring living and high thinking – is due to return to fashion.' – The Independent Magazine

One of Alfred Hitchcock’s favourite writers, John Buchan was a Scottish diplomat, barrister, journalist, historian, poet and novelist. He published nearly 30 novels and seven collections of short stories. He was born in Perth, an eldest son, and studied at Glasgow and Oxford. In 1901 he became a barrister of the Middle Temple and a private secretary to the High Commissioner for South Africa. In 1907 he married Susan Charlotte Grosvenor and they subsequently had four children. After spells as a war correspondent, Lloyd George’s Director of Information and Conservative MP, Buchan moved to Canada in 1935. He served as Governor General there until his death in 1940.