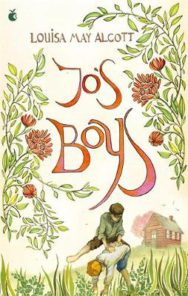 By (author) Louisa May Alcott

In the final book in the Little Women series, we revisit Jo March and her sons.Ten years after Little Men, the boys that Jo raised are grown men. But that certainly doesn’t mean that they no longer need their mother, who still presides, with her husband Professor Bhaer, over Plumfield, their New England school. Emil, now as sailor, must survive shipwreck and disaster. Dan’s attempt to make his fortune ends in prison. Nat’s career in music takes him to Europe, to a life of frivolity and a tricky romantic muddle. But returning to Plumfield to tell their tales, they are, and will always be, Jo’s boys.Also available in Virago Children’s Classics are Little Women, Good Wives and Little Men.

Louisa May Alcott was born in Pennsylvania in 1832. Like the character of Jo March in Little Women, young Louisa didn’t conform to the restrictions placed on girls of the period: ‘No boy could be my friend till I had beaten him in a race,’ she claimed, ‘and no girl if she refused to climb trees, leap fences.’ And, also like Jo, she was highly imaginative and writing was an early passion.As her family was often in financial difficulty, Louisa worked from a young age to support her family, taking any position available: a governess, domestic servant, seamstress and teacher were among her jobs. She also wrote poetry and short stories for popular magazines, and melodramatic novels under a pseudonym. When the American Civil War began, Louisa, who fervently opposed slavery, lamented that women weren’t able to fight, and volunteered as a nurse at the Union Hospital in Georgetown, Washington. Her nursing career was brief as she contracted typhoid, but she wrote Hospital Sketches, a truthful and poignant account based on letters she wrote home to her family in Concord, and it was published to great acclaim.In 1868 Louisa was asked by her publisher to write ‘a girls’ story’. This resulted in Little Women, which is largely based on the experiences of the author and her three sisters. It was a phenomenal success. In a time when children’s books were morality tales featuring idealised, two-dimensional protagonists, Little Women was revolutionary, peopled as it was by relatable, flawed, fully realised characters. Its success guaranteed financial stability for Louisa, who continued the March family’s story in Good Wives, Little Men and Jo’s Boys. Louisa never married, concluding that ‘liberty is a better husband than love.’ She died in 1888 and is buried in Sleepy Hollow Cemetery in Concord.