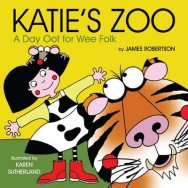 “Katie’s Zoo” is the sixth in the “Katie”-series, following the bestselling success of “Katie’s Coo”, “Katie’s Moose”, “Katie’s Ferm”, “Katie’s Beasties” and “Katie’s Year”. In this new book, Katie spends a day at the zoo, meeting some of the bonnie, braw animals and birds that stay there, among them the tiger ‘in his strippit coat’, the koalas with ‘hairy lugs’, and an array of bright and beautiful birds and reptiles. But Katie’s favourite animals are kept till last…Who could that be bringing up the rear of the penguin parade? Each “Katie” book is slightly different, and in this one the story is told in short, easy sentences containing simple Scots words. Katie is as cheery and inquisitive as ever, and there are lots of things to look at and point to in Karen Sutherland’s wonderful illustrations. “Katie’s Zoo” should prove just as popular as its predecessors.

James Robertson and Matthew Fitt have written numerous books together in Scots, including Blethertoun Braes, King o the Midden, A Wee Book of Fairy Tales and A Moose in the Hoose. Karen Sutherland is an award-winning artist who is also the illustrator of Animal ABC, A Moose in the Hoose and Eck the Bee as well as the other Katie books.