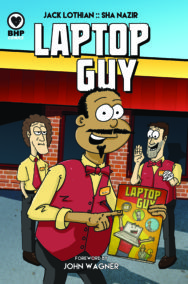 Laptop Guy was created by screenwriter Jack Lothian (Doc Martin, Skins, Tomorrow) and artist Sha Nazir (Mega Penguin, Cobweb, The Amazing Mr. Mackintosh) and collects the first three issues of the critically acclaimed series. Lothian and Nazir lend their perspectives on the trials of the creative process in the sit com style comic.

When Laptop Guy’s protagonist, fast food restaurant worker Sha, comes up with a great idea for a comic it’s all he can think about. But suddenly his creation becomes a little too real and begins causing him big problems. Accidentally creating an imaginary stalker and a bitter arch rival all in one move, Sha’s life takes hilarious twist after hilarious twist.